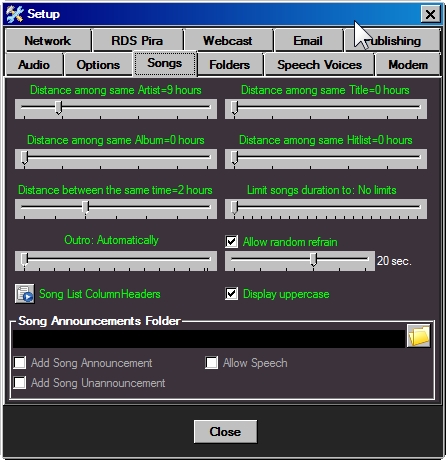 Distance among same artist
This the shortest distance in hours between songs of the same artist. This is a global value and you can stil customize each artist in the Prelisten windows. (This value has no effect on Hitlist songs)

Distance among the same title
This the shortest distance in hours between songs with the same  title. This is a global value and you can still customize each title in the Prelisten windows. (This value has no effect on Hitlist songs)

Distance among the same album
This the shortest distance in hours between songs from the same album. (This value has no effect on Hitlist songs)

Distance among the same hitlist
This is the shortest distance in hours between the same Hitlist song. The same distance also applies to hitlist songs from the same artist. (This value has effect on Hitlist songs only)

Distance among the same time
Indicates the minimum distance in hours from previous airtime. 0 = off, 1 to 4 hours = NOT air the artist before or after the previous air time. (This value has no effect on Hitlist songs scheduled for more than 1 time dayli). Ex: if this parameter is set to 2 hours and today at 9am play the artist Prince,  the next time Prince will not play bewtween 7am and 11am, 2 hours before and after the previous onair time

Note: MB STUDIO will try to apply this rules. If unsuccessful (as happens when you apply too high distances and your song database is limited or poorly stocked) you'll see a timeout error and the song appears with a yellow warning triangle.

Limit length songs
Indicates the maximum length of a song on the air. This value can also be changed automatically on certain days and times through the agenda (MB STUDIO PRO only)

Allow random refrain
It allows the airing of a short piece of track to use with the event REFRAIN. It has effect only on the songs without REFRAIN IN and REFRAIN OUT cue points.

Outro
Value Outro is used with Voice Outro and Voice Track. It has effect only on the songs that was not marked with OUTRO cue point.
If left to "Automatically" Outro is calculated automatically by MB STUDIO.

Song Announcements Folder
This is the folder that will contain announcements and / or unannouncements of songs. This files should be loaded through the Prelisten window.