VOICE OUTRO - VOICE TRACK - VOICE INTRO WHAT ARE THEY?

Voice track is a technique used to produce the illusion of a live disc jockey or announcer sitting in the station's radio studios when in reality he is not actually present.

A voice track file is therefore a spoken file, pre-recorded by the disk jokey, and usually inserted in the playlist between 2 songs: 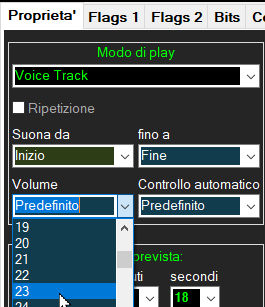 If you have not set an INTRO point to the next song then MB STUDIO will start playing the song only at the end of the voice track..

The voice OUTRO starts playing from the OUTRO point of the previous song and does not overlap with the next song.

The voice INTRO ends its playback at the INTRO point of the next song. If you have not set an INTRO point to the next song then MB STUDIO will start playing the song only at the end of the voice intro. However, in Configuration \ Options you can decide whether to delete a voice Intro when the intro of the next song is zero or does not have a sufficient length.

The Voices INTRO TRACK OUTRO must be spoken files (usually of variable duration between a few seconds and a minute) and must be inserted before or after a song.

The Voice Track and Intro require the presence of the INTRO point on the songs and this must be set individually on each song through the pre-listening: