Hitlist is an additional and temporary genre that you can add to a song to play it everyday until the expiration date. Said in very approximate terms: A standard track, after one play, must wait until almost all the other songs in his class have been played before to get back on air. A song hitlist instead will play pretty everyday, for example 2 times a day and until the expiration date that you can specify. After that date, the song is no longer considered hitlist and will behave has a standard track. This feature is designed to promote the songs of the moment (hit parade) that you want to push more.

Let's see how to set a song as HitList:

in the properties of the song set the desired daily playcount and expiration date. In this example, the song is scheduled to play 2 times a day until 24 September 2016. The first number 53 tells you that you scheduled 53 songs as hitlist, while the other number in brackets it's the playcount of all songs hitlist (in fact a song can play more than once a day)

b) setting some songs as hitlist it's still not enough to have the song playing onair. MB STUDIO, not only wants to know which songs are hitlist, how many times to play it in a day and up to when, but also wants to know where in a playlist should play a song hitlist. You decide the rotation and then only you can tell MB STUDIO where in the playlist you want a hitlist.

A trivial example: I have a rotation with 2 items, and i add a Hitlist song in the third position 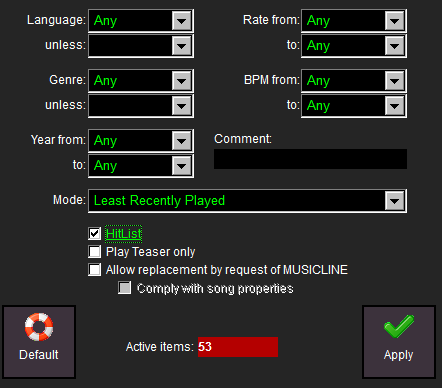 Here is a rotation: a song of any genre, a song of english language, a song hitlist.

How many Random song hitlist i have to put in a playlist?
This is a subjective parameter, it depends on the incidence that you want to give to the hitlist, but also by how many hitlist you have activated. As an example we could say that is not bad to play a rotation like in the image above, 2 standard song and 1 hitlist, or you can create multiple rotations with a different order like 2 hitlist and 1 standard song. You still have to calculate how many hitlist could play dayli and make sure you have enough coverage of tracks (look at the playcount in property hitlist songs). If you schedule too many calls HitList while having a few songs hitlist, you will hear repeated tracks, as opposed if you have many hitlist songs but few calls, some hitlist will not play

A song set as hitlist coudl be selected when called by a standard random song?
No, the hitlist songs may not be selected by a Random Song where the flag "Histlist" is not active