Starting from version 8.70 MB STUDIO PRO + VIDEO PLUGIN allows automatic recording of video (as well as audio). It is usually a question of recording what is on the air for subsequent re-broadcasts, or for 90-day logs required by law.

In the automatic recorder section we can create a video recording: 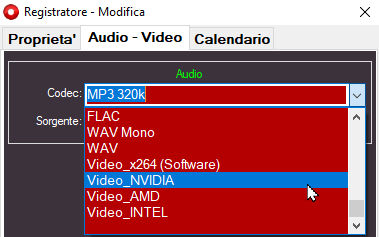 In the Codec section we choose a Video codec: 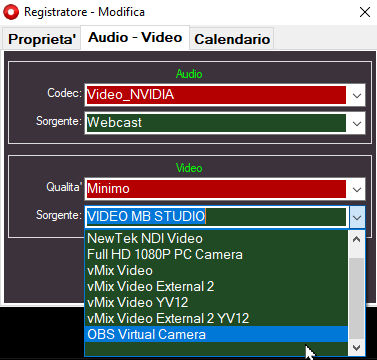 After deciding the type of Video Codec, we have to decide which video source to record from. The "source" selector shows all the video inputs present in the computer, they can be webcams, or video inputs of capture cards. Also available are video returns of 2 popular applications "OBS Virtual Camera" and "VMix", so if you are using one of these 2 applications to send the video stream over the Internet, you can record the video coming from OBS or VMix.

This selection directly captures the MB STUDIO VIDEO window but there are some limitations to consider:

This selection captures the OBS Studio video. The "Virtual Camera" must be activated in OBS 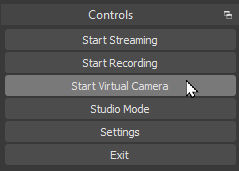 All video files recorded with MB STUDIO PRO VIDEO have .mkv format. This format has no video quality difference with mp4 (mp4 or mkv are just data containers, the content remains the same ie h264 video). MKV has a huge advantage: in case of unexpected recording interruptions (crash, restart, Windows updates) the video file is valid and playable up to the point of interruption, instead with MP4 the entire file would be lost. Also if you activate the upload option to the ftp server MB STUDIO converts the file from .mkv to .mp4 during the upload (as most video webplayers only support .mp4)