DOWNLOAD: HOW TO CHANGE THE AUDIO LEVEL OF A FILE DOWNLOADED FROM THE INTERNET

Among the various options of the MB STUDIO DOWNLOAD window there is one called "Download completed Run". Here you can run a command to do something, for example to edit the audio file we just downloaded. I have often been asked how to raise the audio level of a file because the producer of the file recorded it too low. We can use the well-known ffmpeg program to edit an audio file. 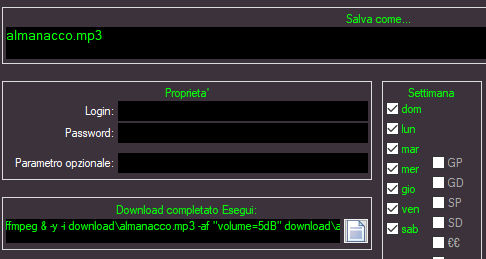 For ease of use I assume that in "save as" there is only the file name (without path). In this way the file is downloaded by default in the MBstudio\download folder

In the "Run" box we enter the following command:

this command reads the file download\almanacco.mp3 increases the audio level by 5 db and saves it in .wav format in download\amanacco.wav (use a .wav output to avoid quality losses!)

MB STUDIO will automatically execute this command after each download of the almanacco.mp3 file.

In the programming of MB STUDIO and / or MB SPOT we will instead insert the amplified version almanacco.wav